Kids in solitary in Philly jails: ‘It was the worst time of my life’ 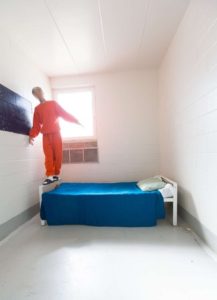 On August 15, 2016, the Philadelphia Inquirer published in-depth reporting on the practice of solitary confinement of youth in adult jails in Philadelphia. YSRP Co-Director Joanna Visser Adjoian calls attention to this harmful practice in the article, stating that “in Philadelphia, solitary confinement is used against children even in pretrial situations, where they have not been convicted of anything.” Remarking on the effect on a young person locked in solitary, Co-Director Lauren Fine states, “There’s sort of a dead look in a kid’s eye when they’ve been spending the entire day in a locked room by themselves,” Fine said. “It is really jarring to see a 16-year-old kid with chains around his belly and hands and feet, and to see that look.”

Care, Not Control: The Album is Here
Care, Not Control: The Album is now available for download! The Album showcases the talents, hopes, and dreams of young people directly impacted by the criminal legal system who are leaders in the campaign.
YSRP Reentry Coordinator Don “Ike” Jones on NPR Weekend Edition
Don “Ike” Jones was one of more than 100 attendees of the inaugural Freedom Celebration hosted by our partners at the Campaign for the Fair Sentencing of Youth in Washington, DC. There, he was interviewed by NPR's Carrie Johnson.
YSRP’s John Pace on The Jawncast Podcast from KYW Newsradio
YSRP’s Senior Reentry Coordinator John Pace talks with The Jawncast podcast from KYW Newsradio about hiring formerly-incarcerated people.
YSRP Quoted in Daily Kos
YSRP staff comments in a recent Daily Kos piece about what justice looks like for children charged as adults in PA.
Back To Top