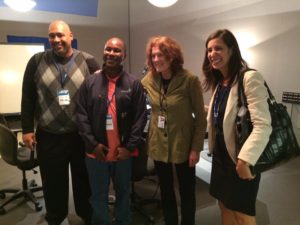 On Thursday, September 29, 2016, WHYY’s Radio Times looked at the impact of the Supreme Court’s ruling in Montgomery v. Louisiana for the more than 300 people from Philadelphia serving now unconstitutional life sentences that were imposed when they were youth. YSRP Co-Director Lauren Fine was a guest on the show, and was honored to share the airwaves with Tyrone Jones, a juvenile lifer who has been out for 29 days after being incarcerated for 43 years, and with PA Department of Corrections Secretary John Wetzel.

For Pennsylvania’s 500 juvenile lifers who now face the prospect of resentencing and possible release, Lauren Fine urges, “It’s very important that the sentencing process be very individualized, but also the reentry process as well. There’s no set checklist of ‘you’ve done these 5 things and now you’ve successfully reentered.’ For us, the reentry process should begin long before someone comes home.” Listen to the full segment above.

YSRP recognizes the work of The Fortune Society

YSRP applauds the Fortune Society, which has sued a private (giant) landlord over its blanket…

John Pace, YSRP JLWOP Reentry Coordinator, receives the Raymond Pace Alexander Reentry Star of the Year Award at a ceremony on June 21, 2018.
Back To Top