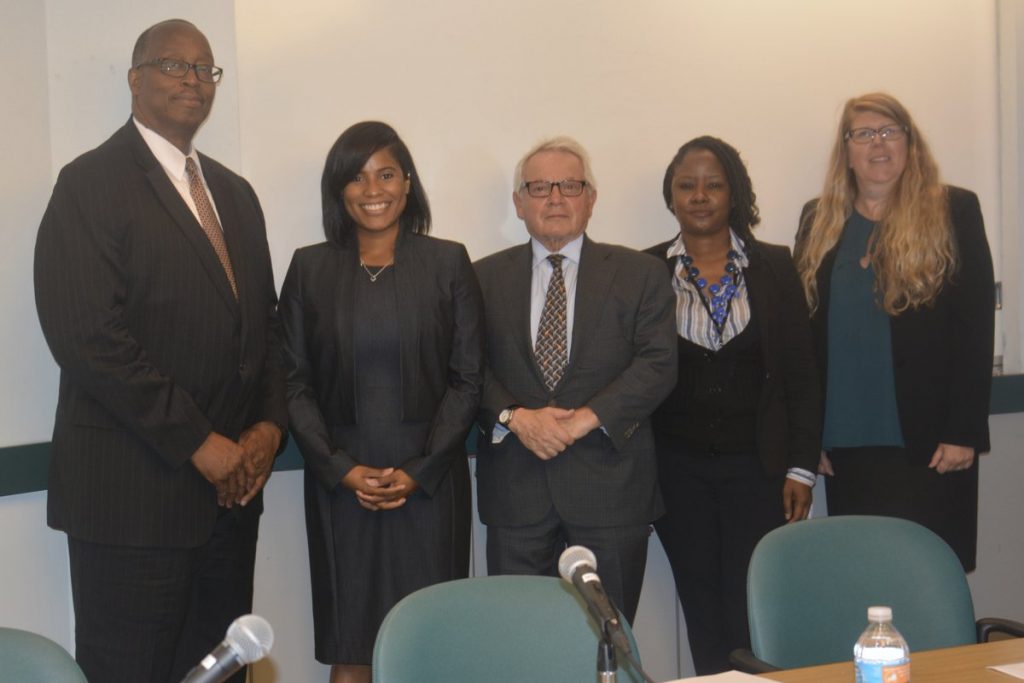 On August 16, 2017, YSRP Stoneleigh Emerging Leader Fellow Natasha Felder served on a CLE panel she organized at the Philadelphia Bar Association on Girls in the Adult Criminal Justice System. Co-hosted by the Legal Rights of Children Committee and the Criminal Justice Sections of the Bar, the CLE examined the process for charging and prosecuting youth in the adult criminal justice system in Philadelphia (Direct File), with a special focus on the needs presented by girls charged as adults. The all-star panel was moderated by former head of the Office of Juvenile Justice & Delinquency Prevention (OJJDP) for the Obama Adminstration, and current Stoneleigh Foundation Visiting Fellow Robert (Bob) Listenbee, Esq., and included Natasha; Ruth L. Johnson, MSW, the Social Work Supervisor for the Department of Human Services for the City of Philadelphia; Benjamin Lerner, Esq., the Deputy Managing Director for Criminal Justice for the City of Philadelphia and former Common Pleas Court judge who presided over Direct File cases; and Michelle Mason, Esq., the Chief of the Juvenile Special Defense Division of the Defender Association of Philadelphia, which represents the majority of children charged as adults in our city. The panel expertly explored advocacy efforts on behalf of girls and young women in the justice system, including girls’ special needs and the fact that they respond to strength-based treatment. As Natasha noted in her closing remarks, “through discussions like the one we had today, we are one step closer to truly shining a light on an overshadowed and underserved population.” Stay tuned for the toolkit Natasha has developed to provide attorneys with critical resources and best practices to support their representation of girls facing charges in the adult and juvenile justice systems, which will launch in September 2017.

We at YSRP applaud the efforts of members of the Philadelphia Eagles, led by Malcolm…

SAVE THE DATE: YSRP cofounders Joanna Adjoian, Esquire and Lauren Fine, Esquire will be guest…

YSRP is Featured in The Inquirer: Under Fire, Philly Stops Suing Parents of Incarcerated Kids

YSRP and the Justice Lab’s work is featured in the The Inquirer by Samantha Melamed in her March 3, 2017 article entitled "Under Fire, Philly Stops Suing Parents of Incarcerated Kids for Child Support"

YSRP is featured on NBC Nightly News with Lester Holt on March 5, 2017 shining a national spotlight on Philadelphia's harmful practice of charging parents for the cost of their kids' incarceration in juvenile detention.
Back To Top