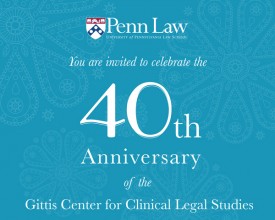 Joanna Visser Adjoian, L’10, co-founder and Co-Director of the Youth Sentencing & Reentry Project, is being honored by the University of Pennsylvania Law School’s Gittis Center for Clinical Legal Studies with its Alan Lerner Rising Star Award on the occasion of the Center’s 40th anniversary celebration.  The award recognizes Clinic alumni who have made significant contributions to society or practice through their legal work. Joanna will receive the award at a ceremony on Thursday, March 23, 2017 at the Law School. The YSRP family extends our hearty congratulations!

In partnership with the Mayor's Office, YSRP created a new Working Group to address the…

YSRP Co-Director Joanna Visser Adjoian was honored by the Philadelphia Bar Association's Young Lawyers Division with an award December 5, 2019.
Back To Top